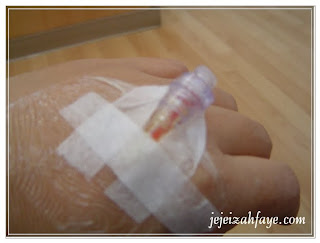 I just had my Nuclear Heart Scan or Myocardial Perfusion Imaging (Dipyridamole) this morning.  It was a 4-hour procedure to evaluate the flow of blood in the heart, to determine if there is a blockage.  A heart scan was done which lasted for 15 minutes prior to the stress test, and another 15 minutes after the stress test.  A stress test  is not like your typical stress test, because it’s minus the treadmill.  A medicine was injected through the IV, and its supposed effect was to mimic the actual stress to the heart as if you’re actually walking and running on the treadmill, though, in this kind of test, you are actually lying down.  The first time I had this test was in 2005, and it scared me because after the drug was injected, it felt like something was crushing my heart, and it was as if I was really running on the treadmill, gasping for breath.  But this time, it was different. I felt heaviness from my waist down to my legs, and I also had stomach cramps. I was quite relieved that I didn’t have the same feeling as I did the first time I had this test.  As a precaution, the doctors are ready with antidote, just in case the patient had chest pains, or felt something unusual, but it’s also injected after the procedure. This antidote is injected in the IV line and immediately the patient will be relieved of everything, like in my case, as soon as the antidote was injected,  immediately, the feeling of  heaviness in my legs disappeared.
During the test, two doctors were on standby, a cardiologist, and a resident doctor.  I still had PVCs, as mentioned by them, though I didn’t look at the monitor because I was scared and I knew I will just worry myself.
This is a much less invasive procedure than angiogram, that’s why my cardiologist preferred this method.  It’s also a safe method, though, I had to stay away from pregnant women and kids below 12 years old for 6 hours after the injection of the medicine because of its radioactive content.
I’m so relieved that it’s over, and now, I’m hoping and praying that the results would be normal.  Normal for me would be no heart blockage, but I’m still praying that eventually the PVCs will also disappear completely.