It was my husband who introduced me to the heart of Manila. I still remember the first time he brought me to Sta. Cruz, Quiapo, and Divisoria, I was so overwhelmed with all the people in the streets. I think I was sheltered by my parents and I wasn’t exposed to those places, and it didn’t help that my school in college was very far from the University Belt in Manila.  That’s why with our kids, even at their young age, we have brought them to the places that I haven’t been to when I was their age. They’ve been to Divisoria, and have been exposed to other places where the people are not the usual kinds of people that you would see in Malls, and I think they’re OK with it.  They’re not so scared, or aloof or apprehensive as when I was their age. I think this exposure helped in molding their character.  I can bring them to very crowded places like Quiapo, and not hear a single complaint from them, except for the usual, “Mommy, I’m tired!”
Yesterday, my husband again introduced me to another part of Quiapo.  He brought me to the Champion Shoe Repairing which had been his favorite repair shop since his younger days. 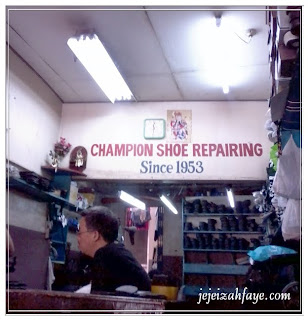 As compared to Mr. Quickie, the cost of repair in that shop was much cheaper, it was half the price, and from what I saw, the workmanship was far better.  I was so impressed with the way the staff worked on the shoes. Everything was done with precision, and they did it fast, we just had to wait for  30 minutes. They’ve been doing shoe repairs since 1953, and  from the looks of it, I think their shop hasn’t had much renovations from the time they started.  But then, most shops in downtown Manila are like that, the owners are not so mindful of the physical appearance of their shops, but people still flock to their stores, if only because, they are a much cheaper alternative to the shops in the Malls. 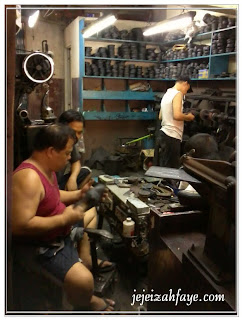 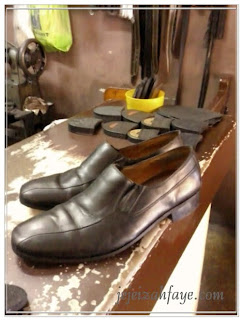 Now, our son will be able to use this pair of shoes for another year.