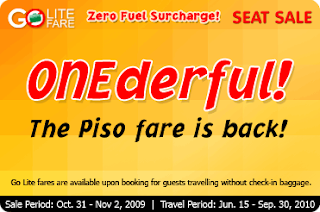 Last 30 October, I received an email alert about the Cebu Pacific Piso Fare promo. It was supposed to start the next day, 31 October until 2 November. When I visited the website, I tried to get some bookings, and I was surprised to learn that the promo has actually started already although the website says that it will officially start on 31 October.

Unfortunately, a lot of people were also accessing the website and as a result, it was very difficult to get confirmed bookings. I tried to book for Manila-Hongkong-Manila, and got really excited because the total fare was only Php4,200 (total of 5 persons), but the system was so busy, and I kept getting an error message. I even tried to split the bookings by opening two windows, but I still got error message. I went to as far as entering the names of the passengers, and even up to payment, but then after that, nothing happened. I spent hours doing the bookings, but no luck! The next day, we had no electricity at home due to typhoon, so no chance of getting online, so when we went out, I dropped by the office and again, tried to do the booking, I even tried Manila-Macau-Manila, but I still got error message. So, I gave up! But I still couldn’t forget the very low fare that I almost got.

And then suddenly, last 10 November, I got a text message from Cebu Pacific that my booking was on hold and that I need to pay at the nearest ticketing office. I got worried because I was thinking that it was for the booking that I made for December in which I already got the confirmation, so I immediately went to the ticketing office nearest to my office. I was told that my booking for December was confirmed. So, I asked them about the text message that I received, and then I suddenly thought of the bookings that I made during the Piso Fare promo. When I asked the ticketing agent to check if I have pending bookings, she saw two bookings under my name which were cancelled due to non-payment. One was for Hongkong and the other one for Macau. I asked if I can still make the payment since I got the payment reminder through text, she said I should call the Call Center Hotline to inquire about it. I was really excited about it, although I was also disappointed when I found out later that the bookings were only for me and my husband. Since I split the bookings in my last-ditch attempt to get through the system, the bookings for my kids didn’t make it.

So, I called the Cebu Pacific hotline and told my story. I gave the Reservation Numbers that I got from the ticketing office, and after checking their system, I was told that I really have pending booking with them. It was for the Manila-Macau-Manila that I booked for July 2010. The other booking was for Manila-Hongkong-Manila which was cancelled due to non-payment. I explained that I didn’t get confirmation email that the booking was processed so how could I make the payment — I pay through Bank deposit and not through credit card. The agent said that he will check on it, but I can already pay for the Manila-Macau-Manila booking if I still want it, and I have 24 hours to pay through phone, or through their ticketing office. I was also told to call the next day to inquire about my other pending booking bound for Hongkong. The cost of the Macau trip was a steal, it was only Php1,886 two-way for 2 persons, it would normally cost Php16,000. I was ready to pay for it already, but then, when I went to the ticketing office in Megamall, I was told that I needed to pay for the service charge plus the Airport tax, which of course I didn’t like. So, I decided to wait for the next day. But then, the next day, I was informed that my booking for Hongkong was also confirmed, and that I can also pay for it if I still decide to get it. It was again, a steal for Php2,053 two-way for 2 persons.

We decided to get the Hongkong flight and gave up the Macau flight, we could just easily go to Macau once we are in Hongkong, anyway. I’m still hoping that I can still get promo fare for my kids, who knows, I got lucky due to the Cebu Pacific’s system glitch, I might get lucky again in their next promo fare.