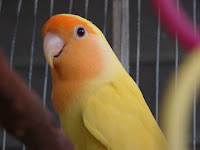 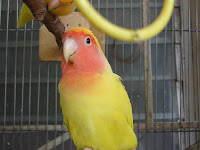 We have African Lovebirds, Fruittie (left) and Jack (right). Actually they had partners before, Tuttie and Jill, but unfortunately, Tuttie died while Jill “escaped” from their cage.

So now, we were left with Fruittie and Jack.

They had an egg last year, but it didn’t hatch. It just disappeared. Then suddenly, an egg again appeared inside their little house. We were again very excited.

Suddenly, last 7 February, they had another egg. All the while, we thought Jack was the male, and Fruittie was the female, but we were wrong.

Unfortunately, this time, when Jack had another egg, she had a difficult time — parang hindi yata nya nakayanan! She died! Oh my goodness! Faye and I were in Tagaytay that time during her educational field trip, when i got an urgent text message from Izah. She was crying because she said Jack couldn’t stand, couldn’t fly. I had a difficult time pacifying her. She was really very much worried about Jack. That was also what happened when Tuttie got sick, she and Faye also cried.

The reason for their attachment to the birds was because we had them while they were still babies, we hand-fed them, giving them Cerelac through syringe. That’s why the kids are so attached to them.

But now, Jack is gone… we were worried that Fruittie might get sad, but so far, he’s OK, and he still has the two eggs left by Jack.